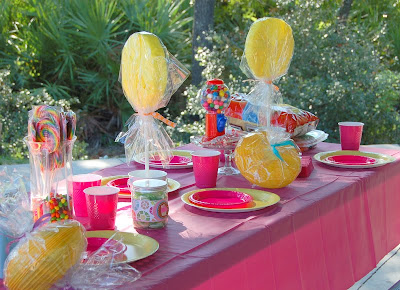 Our sweet Audrey turned FOUR November 1rst and we had a big celebration! I really wanted to do a candy themed party for her. The cousins from Africa are here and I wanted to make the whole party really fun for everyone! 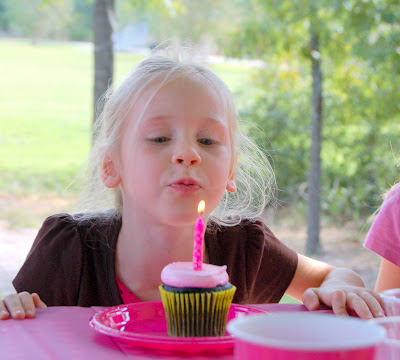 Preparing:
I did a lot of research online. I will share some photos of what I made, links to blogs and links to some how-to's if you're interested! Here we go!

I found this site had some great ides- hostess with the mostest.
This site- real parties - had some cute ideas I used too!
This site.. urbanitystudios.com hade some great ideas for games as well.
Another great source of inspiration- thoughtfully simple.
And this blog... glorious treats.. has tons of awesome party ideas in general, but she also details planning, what she buys and how to prepare for a candy themed party!
More ideas here. 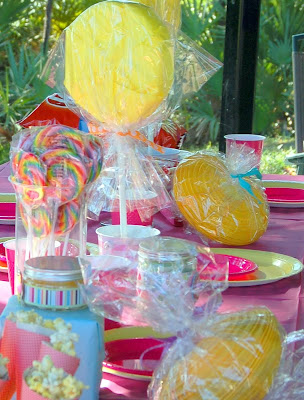 giant lollipops tutorial on how to make the large lollipop decorations. 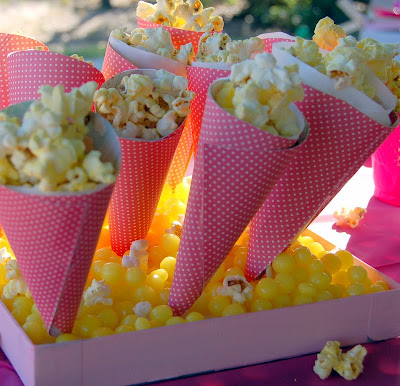 For the popcorn cones, I got the idea from this blog as well as the how-to:
1. Cut a piece of the styrofoam sheet to fit securely within your tray or vase/container.
2. Place the styrofoam in the container, then insert the lollipop sticks into the foam, leaving a few inches in between the sticks to make room for the cones. (You can insert the sticks in neat rows or in a random configuration – whichever you prefer!)
3. Pour candy or popcorn on top of the styrofoam until it is completely covered.
4. Fill each paper cone with candy, popcorn, or another treat, then slide them onto the lollipop sticks.

I made my cones with October Afternoon's Fly a Kite paper line.

Candy holders- Some of the containers I used were from the dollar store. The glass candy jars with lids I got from Oriental Trading Company. I also used doodlebug designs plastic ribbon containers for some of the candy. I wrapped patterned paper around the containers and used some Maya Road felt stickers as accent. I filled these with different candies that people could snack on and each jar could be taken home as a gift as well. 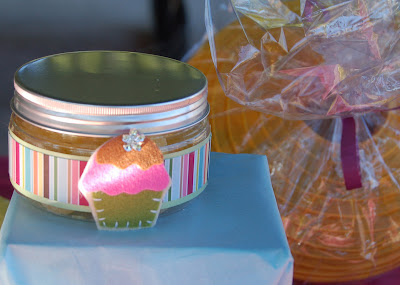 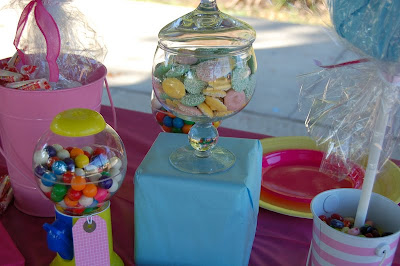 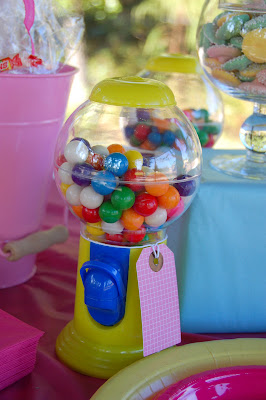 I made two banners (you saw one if you are a member of Cricut Circle blog) with my Cricut Expression. Here is a photo of the second banner I made-

Another part of the decorations were these little gumball machines that I found one night at the dollar tree store while shopping with my friends Angie and Laura! I used some American Crafts city park tags on these and wrote "Thanks for making my birthday so sweet" on the tags. Each child got to take one of these home after the party was over. 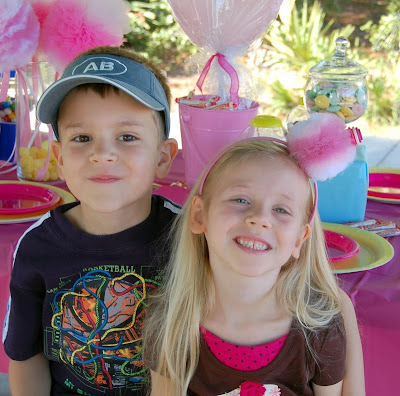 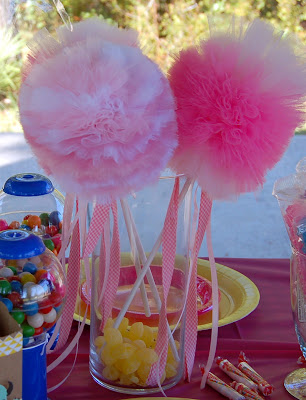 I made tulle wands that the three girls at the party could play with and keep. I tried to make them look like cotton candy by using three similar colors of pink. There is a wonderful tutorial on how to make the tulle wands here at hip girls boutique blog. I used the same technique to make the tulle ball that I placed on Audrey's headband in the picture of her and Alexander before the party started.

Since the boys were not going to be playing with tulle wands, I got each of them a little dollar store transformer car for them to play around with at the party. I set the cars in these little monster bags I made a long time ago... 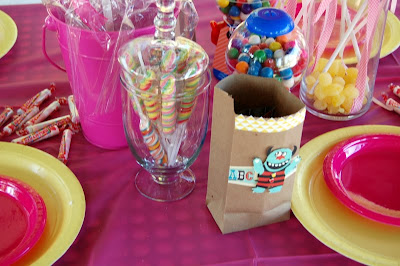 Menu:
After all the planning I kept this simple: The night before the party I made a peanut butter and strawberry jelly sandwich for the kids and chicken salad (from the publix deli section) sandwiches for the adults, wrapped them with wax paper, topped with a cute little party sticker on top. Also, I wrapped patterned paper around the water bottles at the party. I had lemonade and sweet tea for our guests as well. The popcorn in the cones was there to eat. I also had chips, apple slices and a veggie tray.

With all the cake around I decided to go for cupcakes instead of cake- also, my girl is picky and I had a feeling she wouldn't be eating much cake. The cupcakes also served as an activity for our kiddos- I asked publix to make the frosting flat. 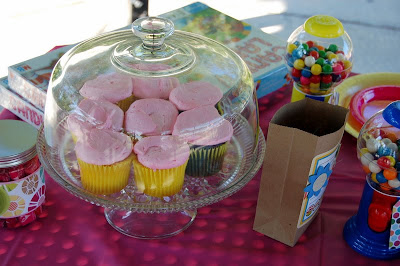 I bought a pack of sprinkles and let each kid "decorate" their own cupcakes before eating them. Here's a picture of my nephew, Luke, decorating one.. 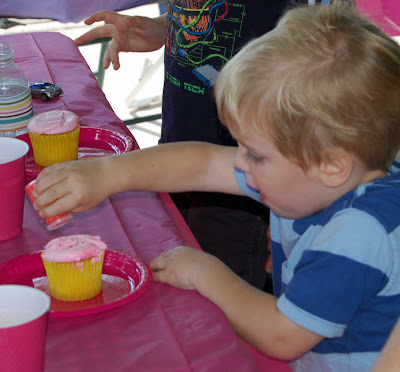 Games:
Several ideas were borrowed from the blogs listed above.
We started our party with a candy relay race- so easy and fun!
I bought a bag of skittles, divided them into two cups and placed those cups at a starting line. I placed two large blue buckets (2.50 each in the Target dollar section) at the opposite end. Divide your guests into two teams, give each person a plastic spoon. Ready set... go... each person needs to scoop up some skittles and make a dash for the bucket. That person needs to come back to the starting line before the next team member can take off (ya, that didn't really happen with the kiddos but doesnt matter as long as no-one ran into each other! hee). The team with the most skittles in their bucket by the time the timer goes off wins~ 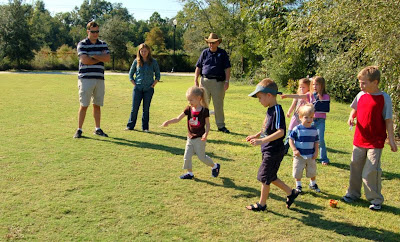 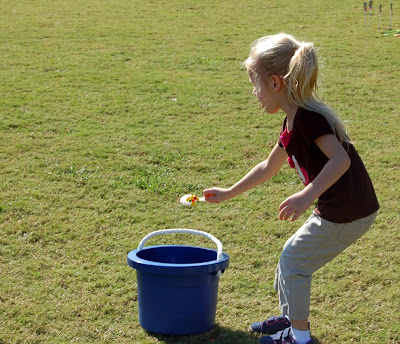 Another game was guess how many pieces of candy in a container- we kinda forgot about that one, but it's still a good idea.

Then, we did a lollipop ring toss. I used my Cricut Expression to make these lollipops for the game. The rings were on major sale because they are just plastic pool toys from the summer! Here are some pictures of the game- I think the kids had fun with it! 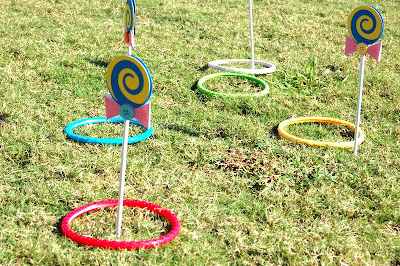 Thanks for letting me share! It was so fun just having our family together, playing, and celebrating. We had the party at a park which made the down time between games, eating, etc. a non-issue because they just ran off to play during those times. 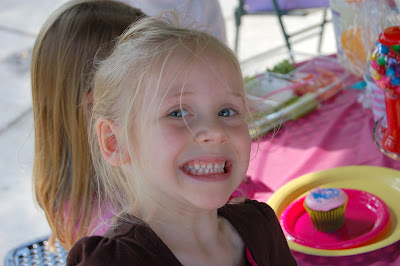 what a SWEET b-day party. love all the details.

Happy Belated B-Day to your daughter.

looks like a fantastic party and I love all of the party decor!! :)

Simply adorable!! I love the popcorn cones and giant lollipos! Looks like she had a ball! :)

Wow, what a great party - Audrey is a lucky little girl!! Thanks for the pictures, links and all the 'how to' info - you're a wonderful party host and I'm looking forward to using some of these great ideas for my Granddaughter's next party (she's the same age)!

Looks like such a fun birthday party! Love all the work you put into it.

What an amazingly sweet party Charity! It was a gorgeous and festive celebration, great job!

Looks like a lot of fun! You did a great job! Thanks for linking to me. I'm glad I was able to offer a bit of inspiration.

Such a cute idea, looks like everyone enjoyed themselves.