Ready for a long post? We celebrated Audrey's 5th Birthday with a fun Cowgirl themed party! 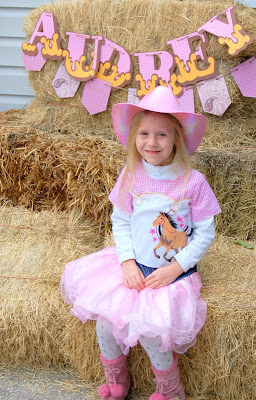 Horse rides -there was a pony and a horse for the first hour so all the kids got to ride a LOT! The horses were so gentle and their hair had been braided with little bows in their hair! Cute! 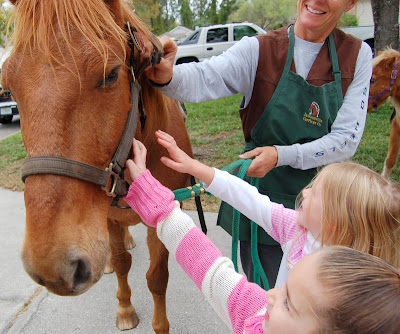 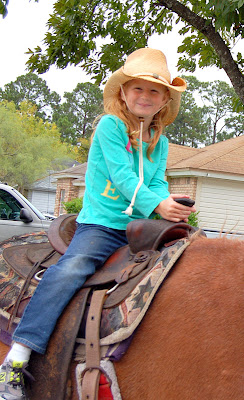 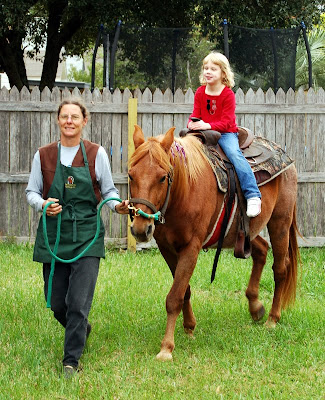 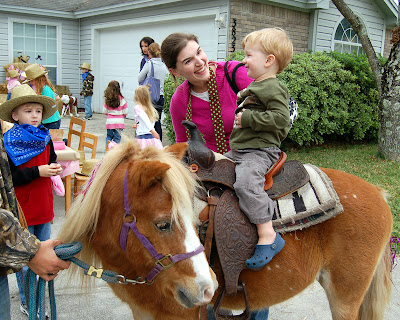 Coloring - While the pony rides were going on I had taped down (it was a very windy day) some free printable cowboy/cowgirl pictures for the kids at their places at the table that they could color if they got tired of watching everyone else ride the horses.

Calf Roping - My mom found instructions online (I dont have the link, but you could google it I'm sure) and worked so hard to make the adorable little cow for the kids to lasso! She brought the lasso and manned the cow. She even had little prizes for the kids who played- thanks Mom! She also scored the cute little saddle that we set on a hay bale. The kids loved posing on the saddle and playing on it! Thanks to my mom's friend for letting us borrow the saddle for the day! 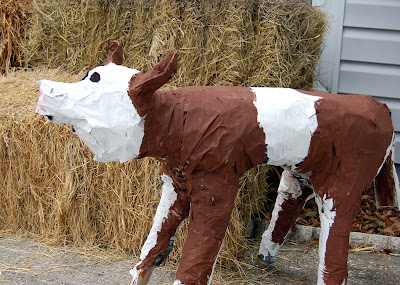 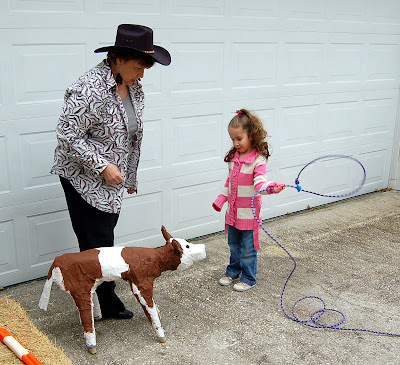 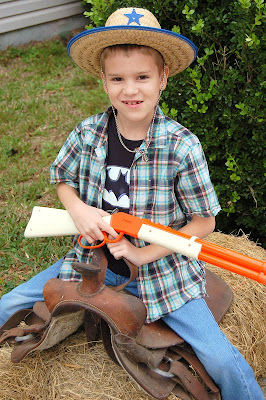 Find the hidden treasure- When it was time for the ponies to leave we hid some small bouncy balls in the back yard. The kids all went to hunt those down. While they were doing that, I got out the stick horses, also known as hobby horses that I had made for the party.

Stick horses: I do not sew, but I really loved the idea of the kids having a stick horse and decorating it themselves. I found this idea on this blog, but I did not want to mess around with PVC pipe. I found another similar idea but the woman used yard sticks for the stick of the stick horse. Here is what I did. I found a horse head template, downloaded it to my computer, blew it up and printed it out as large as I could on a 81/2*11" paper. I traced it onto posterboard and cut it out. That first cutout was my template to trace the rest of the ponies. Of course, you have to trace and cut twice for each pony you will make. I simply bought wooden spindles from Joannes fabric (around 90 cents each) Once I had all my horse heads cut out I hot glued the spinle onto one horse head. Then, I hot glued the two sides of the horse heads together. Next, I used a hole punch to make the hole where I thought a bit would be and threaded inexpensive twine thru for the reigns. Easy! Each table had crayons, markers and googly eyes for decorating. I could not believe how big of a hit this was- kids from 3-8 years old all loved decorating and playing with these! yay! 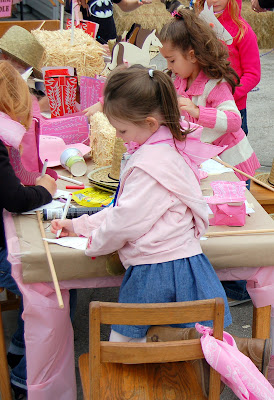 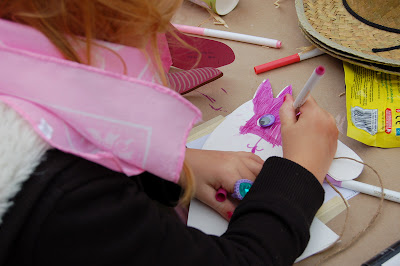 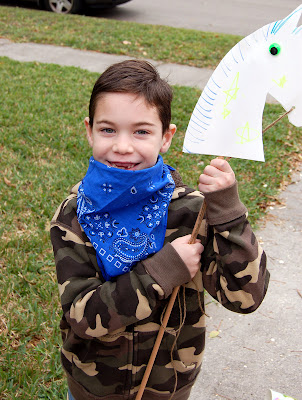 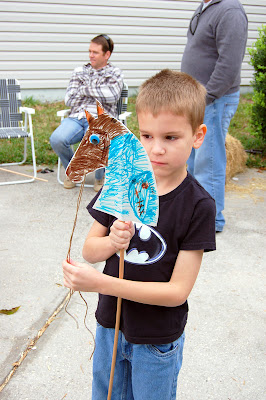 Photo Booth- The photo booth was an idea found online- I bought some hay bales from a local church the day after they ended their Pumpkin Patch. The small hay bales for the tables I bought from Wal-Mart. They're actually seasonal decorations for fall. I used a screw driver to make the holes in the decorative hay bales to put the horses in. I simply added the banners I had made for the background, my mustache piques and a sign to the side saying photo booth. Everyone had a great time being silly and taking pictures. 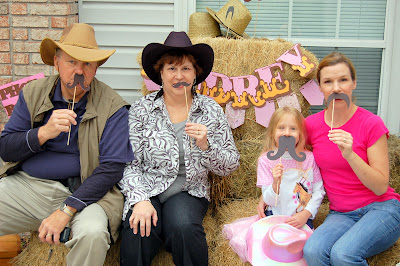 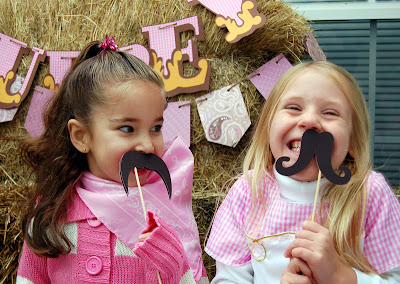 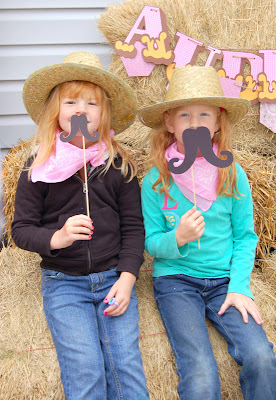 I made many of the things for the party using my Cricut machine. I made the fun mustaches, the horses on the tables, the banner, the signs and the Audrey banner using my Cricut. Oh, I also made the cupcake toppers as well. 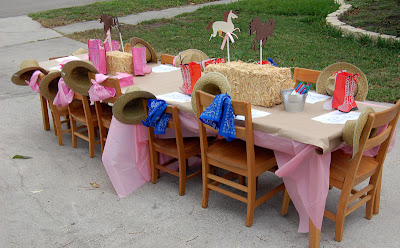 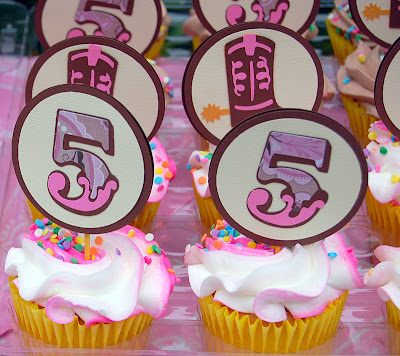 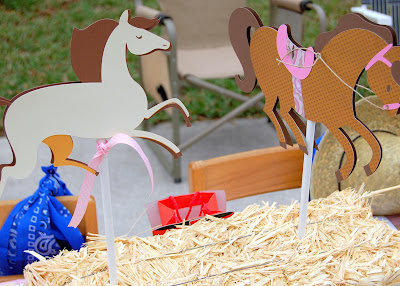 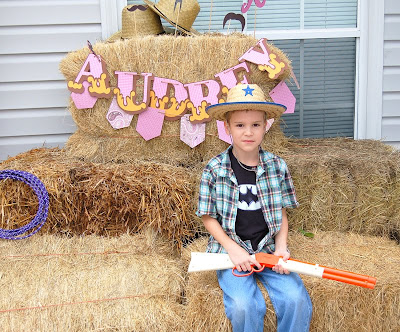 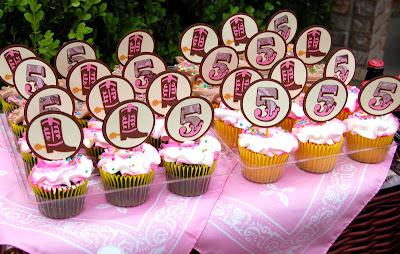 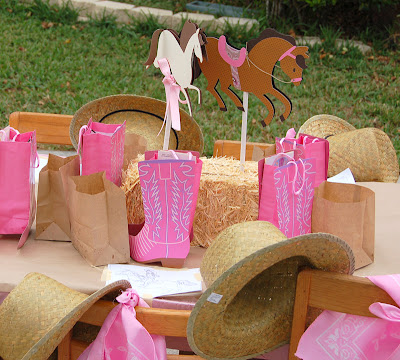 I used several carts to make my projects. The cute horses on the table were made using the Yee-Haw cart from Cricut!

Also, the cupcake toppers were made using both Yee-Haw and also the Imagine Country Carnival- I used the cut only option and used papers/colors that fit with the party instead of printing the colors/patterns that come on the cart.

The mustaches for the photo booth were made using the Cricut Lite Billionare Cart.

Food:
Honestly, I could not afford to go all out on food. We had the party from 12:30-2:30. I worded the invitation to say "Make sure you eat lunch before you come but save room for cupcake and lemonade." to let everyone know I would not be serving a lot of food.

We did have: Pink lemonade, Root beer, bottled water, popcorn in brown paper bags that I cut about half the top off (it was so windy outside that a lot of popcorn ended up on the ground though, lol). We also had the cupcakes, of course! 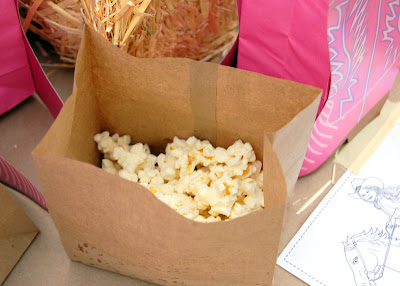 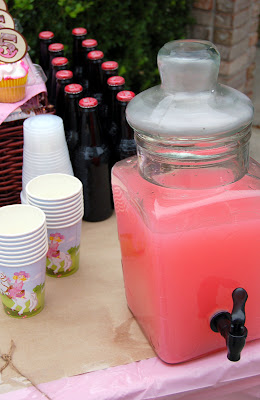 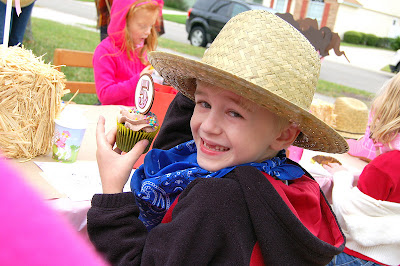 It was so windy out that we had to shelter Audrey's cupcake long enough to sing before she, or the wind, could blow out her candle! 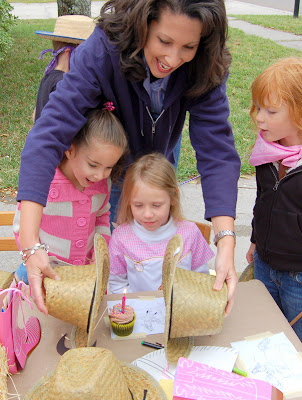 LINKS to inspire you, as they did me! OH, and a tip- if you're googling for this theme party try all sorts of things- cowgirl, western, pony themed, horse themed, etc. to get more results.

Also, ETSY has tons of adorable printables for pretty cheap, there are some cute western themed clothes, crayons, etc. there too! 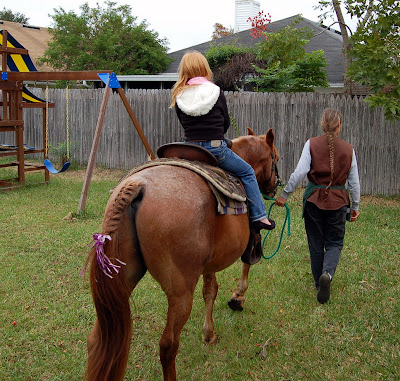 Posted by Charity Hassel at 6:19 PM

You wow-ed us again, as ALWAYS miss charity!!!!! It was SUCH fun. All of your little details and fun decorations made it just as fun for US to look at, as it was for the kids!!!! You are awesome! You'll need a vacation this week, after all that! :)

Wow - now that is a 5th birthday party. All of the details and love that went into are so wonderful! Love the roping calf - the pink lemonade and root beer! And the Cricut projects were totally great too! Audrey, Happy Belated Birthday!

What a great party! You did an awesome job, I love all the details


VERY impressive! My daughter would love this. She is 4 and wearing a pink cowgirl hat and pink cowgirl boots right now!!!


I'm a Cricut Circle member too!

THANK YOU!!! for sharing!!! You have given me many ideas that I will use for my daughter's birthday in June. Yay!!!

What an adorable party. I loved the decorations, the mustaches, and especially your handmade calf. too cute! Thanks for sharing!

Super cute! So many great ideas - thanks for sharing!

Wow, what a gorgeous party! I love those boot favor bags - they're super cute!